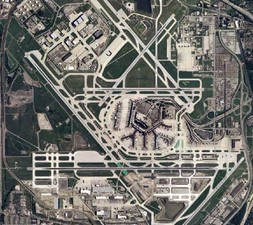 Chicago O'Hare International Airport also known as Chicago O'Hare or by its code ORD is a major international airport located in the northern suburbs of Chicago and serves as the primary airport for the Chicago-Cook-Rockford-Gary metro area and also serves as a international gateway for residents in Milwaukee (which has their own airport, mainly domestic service). O'Hare is the main airport serving Chicago with Chicago Midway as a secondary airport. O'Hare boasts 9 major runways, 4 numbered terminals containing 9 lettered concourses and facilities capable of handling Boeing 747 and Airbus A380 aircraft. In terms of passenger traffic O'Hare is the 4th busiest airport in the world and in terms of flight operations, it constantly trades the title of busiest airport in the world with Atlanta International Airport from year to year.

There are many facilities on the airport grounds that cater to any travelers needs. There are many parking options for travelers such as airport economy parking to local parking companies. There are also many car rental facilities on the grounds, and practically all of them are affiliates of Allstar Travel. These fine companies include Alamo, Thrifty, Budget and many more. The airport is located 17 miles northwest of downtown Chicago and is around a 35-120 minute drive on Interstate 294 - Interstate 290 to downtown Chicago. With countless facilities to cater to each travelers needs, getting in and out of Chicago is a windy city breeze!

Chicago O'Hare Airport is one of the main air transportation hubs of the world and an extremely important gateway to Americas heartland. It truly makes for a pleasant travel experience to Chicago.

-Chicago O'Hare is one of the few airports worldwide that has the distinction of serving over 200 destinations, O'Hare serves 210 destinations
-O'Hare serves as a hub for American Airlines, United Airlines and Air Choice One
-O'Hare Handled 875,000 aircraft operations in 2015
-O'Hare is infamous for large amounts of stranded travelers due to weather and technical mishaps.
-O'Hare's new control tower is 225ft tall, its old tower was 218ft tall
-O'Hare has 9 runways including a 13,000 footer