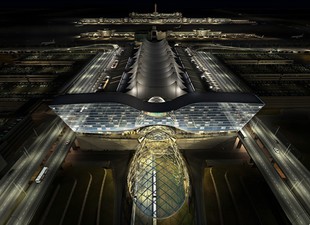 Denver International has a terminal layout similar to Washington Dulles Airport and Atlanta International Airport consisting of one "anchor" terminal and 3 "satellite" terminals. the "anchor" terminal houses checkin counters, countless shops and restaurants, baggage claim, pickup/dropoff, TSA security lines and a connected Westin hotel. There are 3 satellite terminals all interconnected by a underground tram with the exception of the Jeppesen Terminal which has both a pedestrian bridge and a tram stop. All satellites have their own shops, restaurants and bathrooms. The satellite closest to the main terminal is the Jeppesen International Terminal or concourse A which has facilities for handling international widebody jets. The Jeppesen terminal contains gates A26-53, A56, A59-65 and A67-68 for a total of 38 gates. The Jeppesen houses Air Canada, Aeroméxico, American Airlines, Boutique Air, British Airways, Delta Airlines, Frontier Airlines, Great Lakes Airlines, Icelandair, JetBlue, Key Lime Air, Lufthansa, PenAir, Spirit Airlines, Sun Country Airlines, Volaris and Virgin America. The middle satellite or concourse B contains gates B15-29, B31-33, B35-39, B41-61, B63-77 and B79-95 for a total of 68 gates. Concourse B exclusively houses United Airlines and their regional carrier United Express, which operate their 4th largest hub at Denver. The satellite furthest from the main terminal is concourse C which contains gates C23-39 for a total of 27 gates. Concourse C almost exclusively houses Southwest Airlines though Alaska Airlines has 1 gate for its Seattle route. All of DENs airsides are well equiped for any travelers needs and are rather easy to navigate.

There are many facilities on the airport grounds that cater to any travelers needs in Denver. There are many parking options for travelers such as airport economy parking to local parking companies. There are also many car rental facilities on the grounds, and practically all of them are affiliates of All Star Travel. These fine companies include, Alamo, Budget, Hertz and many more. The airport is located 25 miles east of Denver's financial district and is around a 10-30 minute drive on Peña blvd-interstate 70 to downtown Denver. With countless facilities to cater to each travelers needs, getting in and out of Denver is a breeze.

Denver International Airport is one of the best large airports in America and the World. Its special design makes it a unique airport to visit and a pleasure for aeronautical enthusiasts, something that Denver's people take pride in and that Denver's visitors admire.
For more information, visit www.flydenver.com

-Denver International Airport was opened in 1995 to replace the aging Denver Stapleton Airport
-Runway 16R/35L is the longest commercial use runway in North America at 16,000ft in length. In comparison to Chicago's 13,000ft 10/28 and Detroit's 12,003ft runway 4L/22R
-Denver International is the subject of many conspiracy theories due to the odd shape of its runways, the "Blucifer" horse statue, and weird murals/art figures throughout the facility
-Denvers control tower is one of the tallest in North America at 327ft tall
-DENs main terminal roof is designed to resemble the Rocky Mountains
-Denver offers flights to nearly 180 destinations around the globe