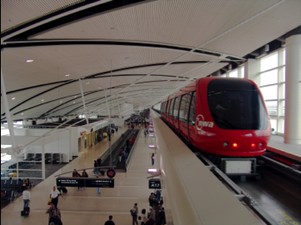 
Detroit Metropolitan Wayne County Airport also known as Detroit Metro Airport or simply DTW is a major international airport in the United States that is located in Romulus, Michigan (a suburb of Detroit). It serves much of the southern Michigan region and northern Ohio region. Most notably the Detroit metro area and Toledo metro area. DTW is one of the largest and most modern air transportation hubs in north america, boasting 6 major runways, 2 terminals with 4 concourses containing 150 in service gates and facilities capable of handling multiple Boeing 747 and Airbus A380 aircraft. In terms of flight operations (take-offs and landings), DTW remains one of the 10 busiest airfields in North America.

DTW contains 2 active terminals, the Edward H. McNamara terminal and the North Terminal. The McNamara terminal contains nearly 120 gates in 3 concourses (A,B and C) and is exclusively used by Delta Airlines, Air France, Virgin Atlantic and KLM. The McNamara terminal contains one "anchor" terminal and one "satellite" terminal. The larger "anchor" terminal contains concourse A and is known as being the longest terminal building in the world at 1 mile long. Inside the terminal you will find a express tram for ease of transport as well as many moving walk ways. Within the smaller "satellite" terminal you will find the B and C concourses. The two terminals are connected by an underground walkway that is world renowned for its light show. The McNamara is a state of the art terminal that is easy to navigate and contributes to a pleasant trip to Michigan. The North terminal contains 26 gates in 1 concourse (D). It houses Spirit Airlines, American Airlines, American Eagle, Southwest Airlines, Lufthansa, Alaska Airlines, Air Canada Express, Icelandair, Frontier Airlines, JetBlue Airways, Royal Jordanian, United Airlines, United Express and Sun Country Airlines. The North, like the McNamara, is easy to navigate and contains many shops and restaurants. Both terminals are state of the art facilities and are certainly some of the nicest in america and the entire world.

On the airport grounds there are many facilities to handle each individual travelers needs. There is a AAA 4 star Westin Hotel connected directly to the McNamara terminal and there is shuttle service to the North terminal. Each terminal has their own parking garages and there is also parking located elsewhere on the property that are operated by private companies. There are also many car rental facilities on the grounds, and practically all of them are affiliates of Allstar Travel. These fine companies include, Alamo, Budget, Hertz and many more. The airport is located 16 miles Southwest of downtown Detroit or approximately a 25-60min drive on Interstate 94. With countless facilities to cater to each travelers needs, getting in and out of Detroit is a breeze.
Detroit Metro Airport is one of the nations largest and most recently expanded air transport hubs. It is truly unique to the city of Detroit and state of Michigan and makes for an enjoyable travel experience.
For more information, visit www.metroairport.com

Fun facts-
-Detroit Metro Airport was once Northwest Airlines base before they merged with Delta
-Detroit Metro Airport is one of Americas few airports that has 4 parallel runways
-The control tower is 250ft tall (if it was located to the side it would have to be 400ft tall)
-The airport serves nearly 170 destinations
-Air traffic at Detroit is expected to rise to 65 million passengers by 2030
-the McNamara's parking facility contains 10 levels,  is one of the largest parking
buildings in the world and can accommodate 11,489 vehicles
-Detroit is one of Air Jordanians few American destinations