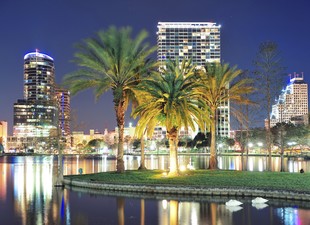 There are many facilities on the airport grounds that cater to any travelers needs. There are many parking options for travelers such as airport economy parking to local parking companies. There are also many car rental facilities on the grounds, and practically all of them are affiliates of All Star Travel. These fine companies include, Alamo, Sixt, Budget and many more. The airport is located 10 miles south of downtown Orlando and is around a 15-40 minute drive on S Semoran Blvb - FL 408 west to downtown Orlando. With countless facilities to cater to each travelers needs, getting in and out of Orlando is as easy as riding Poseidon's Fury!

Orlando is one of the most popular internet European holiday locations, and is known  as one of the main connection airports for destinations in the Carribbean. Orlando has much to offer and its main airport is one flight away.

Fun facts:
-Orlando International Airport's code MCO comes from its former name McCoy AFB
-Orlando serves as a focus city for Frontier, Southwest and JetBlue
-Orlando international's control tower is 345ft tall, 126ft taller than the original
-Orlando International is one of the few US airports with 4 parallel runways
-Orlando has no service to Asia (except Dubai), Australia and India