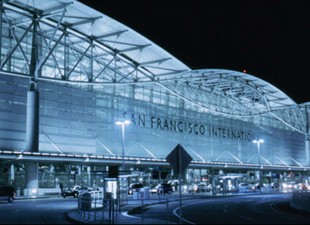 San Francisco International Airport has 4 terminals laid out in a D format that contain 7 concourses lettered A-G. Each terminal has their own checkin, TSA security checkpoints, shops, restaurants and baggage claim. Some of the terminals are interconnected, such as T3 (T= terminal) to the International Terminal and T1 to T2. However there are no connections between T1 and the International Terminal, T2 and T3 as well as concourse A and G of the International Terminal. Terminal 1 also known as the South Terminal contains concourses (or boarding area) B which comprises of 24 gates and concourse C which contains 10 gates. As of 2016 Terminal 1 is currently being completely reconstructed and will allow for greater efficiency as well as future expansion. Terminal 1 houses American Airlines, Delta Airlines/connection, Frontier Airlines and Southwest Airlines. Terminal 2 also known as the Central Terminal is SFOs original terminal constructed in 1954 however has been recently renovated and is now a state of the art facility. T2's 14 gates house Virgin America and American Airlines. Terminal 3 also known as the North Terminal was opened in 1979 and contains concourses E which contains 10 gates and F which contains 29 gates. The terminal has been recently updated and has served as the hub terminal for United Airlines and their regional carrier United Express. The International Terminal was opened in 2000 and serves all international flights to SFO except pre-cleared Canadian flights. The terminal is a common use facility and commodities are shared among the airlines including the total of 28 gates between concourses A and G. The terminal contains US customs and Aer Lingus, Aeroméxico, Air Berlin (seasonal), Air Canada, Air China, Air France, Air India, Air New Zealand, Alaska Airlines, Asiana Airlines, Avianca El Salvador, British Airways, Cathy Pacific, China Airlines, China Eastern Airlines, China Southern Airlines, Copa Airlines, Emirates, Etihad, EVA Air, Fiji Airways (seasonal), Hawaiian Airlines, Japan Airlines, JetBlue, KLM, Korean Air, Lufthansa, Philippine Airlines, Qantas, Scandinavian Airlines, Singapore Airlines, Sun Country Airlines, Swiss International Airlines, Turkish Airlines, United Airlines, Virgin Atlantic, WestJet, WOW Air, XL Airways France. All of San Francisco's terminals are well up to date and provide each traveler with much flexibility and lots of comfort.

There are many facilities on SFO's grounds that cater to any travelers needs. There are also many parking options for travelers such as airport economy parking to local parking companies. There are also many car rental facilities on the grounds, and practically all of them are affiliates of All Star Travel. These fine companies include Alamo, Thrifty, Budget and many more. The airport is located 13 miles south of the  San Francisco business district and is around a 20-50 minute drive on State Road 101- Interstate 80- 3rd Avenue to the city centre. With countless facilities to cater to each travelers needs, getting in and out of San Francisco is a breeze.

San Francisco International is one of the busiest international gateways to east Asia and the Pacific. This great airport also serves as a gateway to one of America's most unique cities and beautiful sceneries.

-SFO's longest runway is around 11,800ft long
-SFO serves as Virgin America's principal base of operations and United Airline's 5th largest hub and Pacific gateway.
-SFO's new control tower is one of the worlds most advanced and is 221ft tall
-only 2 of SFO's four runways may be used at once due to its + sign layout
-SFO's International Terminal is the largest International Terminal in the US and the largest structure built on base isolators (earthquake protection) in the world
-SFO has 4 airlines operating Airbus A380 aircraft, they are Lufthansa, British Airways, Air France and Emirates