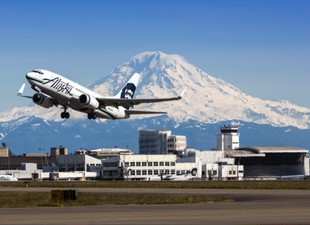 Seattle-Tacoma International Airport also known as Seatac or SEA is located in Seattle's southern suburbs and serves the Seattle-Tacoma-Bellevue Metro Area. Seatac and serves as the primary airport of the Pacific Northwest along with Portland International Airport as the second largest airport in the region. Seatac has 3 major runways, 1 terminal with 6 concourses and facilities capable of handling Boeing 777 and Airbus A330 aircraft. Seatac is one of the Fastest growing airports in the country and has grown from 29 million passengers a year in 2010 to 37 million passengers in 2014.

There are many facilities on the Seatac's grounds that cater to any travelers needs. There are many parking options for travelers such as airport economy parking to local parking companies. There are also many car rental facilities on the grounds, and practically all of them are affiliates of All Star Travel. These fine companies include Alamo, Sixt, Budget and many more. The airport is located 12 miles south of Seattle's business district and is around a 15-35 minute drive on State Road 99 - State Road 518 - Interstate 5 to the city centre. With countless facilities to cater to each travelers needs, getting in and out of Seattle is a breeze.

-seatac is the fastest growing airport in the US
-seatac is the main hub of Alaska Airlines
-seatac's main parking garage is one of the largest in the US along with Detroit (DTW)
-seatac's control tower is 233ft tall
-seatac has 3 parallel runways that vary from 8,500ft long to 11,900ft